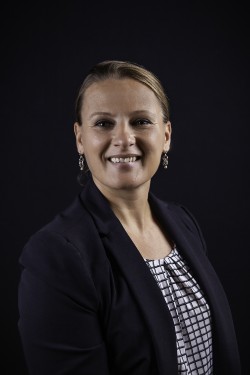 A graduate of Western Michigan University in 2000 with a BBA in General Business and a Spanish minor, Angela moved to Jackson in March of 2007 to join the American Red Cross where she gained her first few years of experience in event planning. While working for the Red Cross was a fantastic experience for Angela, she ultimately made the tough decision to leave the Red Cross in 2008 and moved to the Jackson County Chamber of Commerce as the events director. In August of 2016, she left the Chamber to start her own corporate event planning business and continues that business today.

Currently involved in the Jackson Business and Professional Women’s Organization as the secretary, she was named the 2012 Jackson BPW Person of Achievement, and in 2013 was a Harriet A. Meyer award recipient. Most recently Angela became the 2015 Susan B. Anthony award recipient. She as well serves as the Parade Director for the Jackson County Rose Parade, and is a mentor for Energizing Education and so much more.

In addition to her professional experience she loves spending her free time as a mom to her almost 7-year old daughter Olivia, practicing yoga, reading, and taking their yellow lab Duke, who was adopted, for long walks, and of course, traveling around the USA and internationally.

This email address is being protected from spambots. You need JavaScript enabled to view it.